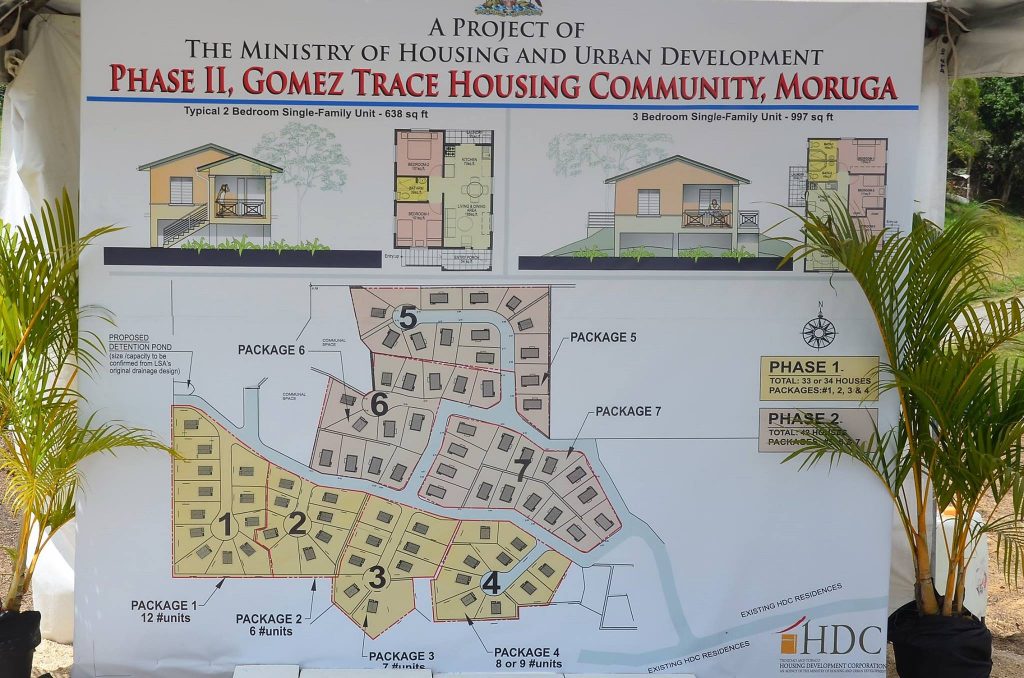 On Saturday 27 May 2017, Housing and Urban Development Minister, Randall Mitchell and his parliamentary colleague, Dr. Lovell Francis, Member of Parliament for Moruga/Tableland, turned the sod for the newest public housing development which will be located at Gomez Trace, St. Mary’s Village, Moruga. This is the fourth sod-turning activity that the Ministry and its implementation agency, the Housing Development Corporation (HDC) have undertaken in the past 12 months.

This development, which will be completed in two phases, is expected to provide seventyseven (77) single family units. Phase one will yield thirty-six (36) units with phase two providing forty-one (41) units. This project will be split in seven (7) construction packages so as to facilitate bids from smaller contractors. This approach, the Ministry hopes, will provide employment to not only those working on the structure of the homes but the other ancillary works associated with this project. The Gomez Trace Housing Development is expected to also contribute to the further growth and development of the area of Moruga as it follows two other economically driven projects – the $200M Fishing Port at Grand Chemin and $70M Agro Processing and Light Industrial Park for the processing of sea food and other products from the agriculture and forestry sectors.

Speaking before residents of Moruga and other specially invited guests, Minister Mitchell highlighted the many incomplete projects left by the last government, some of which started prior to 2010. Notwithstanding this challenge, the Minister re-affirmed his commitment to ensuring that all these projects are brought to a state of completion and are allocated to deserving applicants on the Ministry’s database since the housing units are more valuable to Government when they are lawfully occupied than left incomplete to the mercy of vandals.

In his address, the Minister also indicated that Government through the Housing Ministry will continue to review its national housing policy so that it adapts to changing circumstances and remains beneficial to the country’s low to lower-middle income families. In so doing, the Minister advised of an impending shift of policy concerning the provision of affordable rental units. This proposed shift is supported by data which shows that the majority of citizens seeking affordable housing, presently earn less than $6,000 a month which makes it difficult for them to service a mortgage or even afford the rent to own programme. To treat with this situation, the Ministry and the HDC will focus their attention on those most in need, even as these state entities are experiencing reduced allocations from central government.

The HDC will therefore continue to rely on private sector funding and involvement through Joint Venture and Public Private Partnership arrangements for the construction of mortgaged units for qualifying applicants.

In closing his address, the Minister thanked the Member of Parliament for welcoming the Ministry and the HDC to his constituency of Moruga/Tableland. The Minister also thanked the Chairman and members of the HDC Board, the newly appointed Managing Director and his management team and all others who continue to work tirelessly to implement Government’s vision for the housing sector. Minister Mitchell expressed his hope that the new leadership at the helm of HDC, will provide greater accountability, transparency, equity and improved service delivery.

In addition to the Member of Parliament for the area and Councillor from the Princes Town Regional Corporation, Ms. Marion Hayes, Permanent Secretary (Ag), Mr. Rasheedali Mohammed, Deputy Chairman of the HDC Board, and other members of the community, witnessed this project launch.

Over the period 2016 to 2017, the Ministry and the HDC have delivered over 1,600 homes to deserving applicants. More units will be distributed as soon as they are completed. In the upcoming months, the sod will be turned for the Trestrail Lands Housing Development in D’abadie and the Corinth Hills Development in San Fernando.