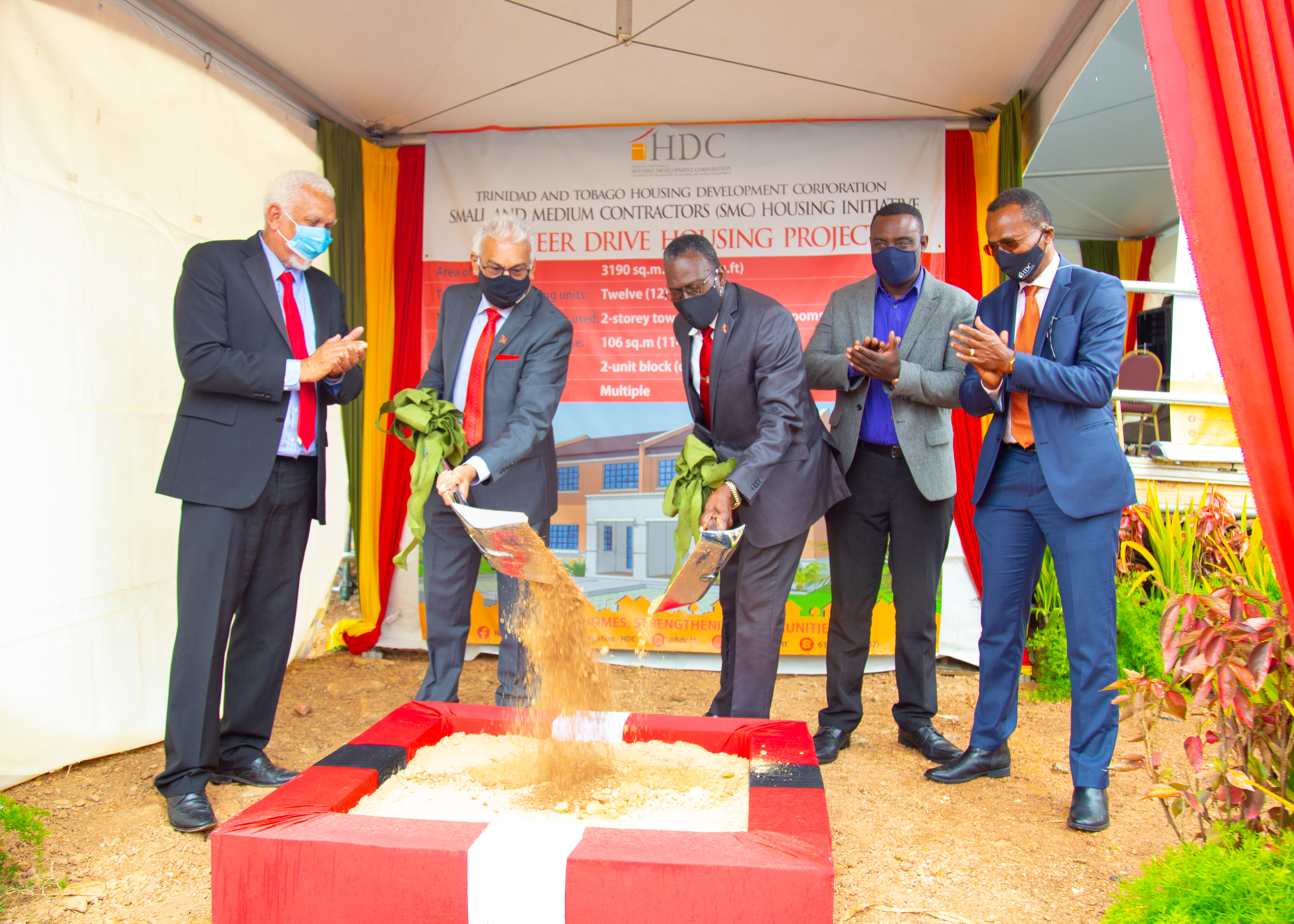 Housing and Urban Development Minister Edmund Dillon; Member of Parliament for St. Joseph, Terrence Deyalsingh and HDC executives today (Tuesday June 16) broke ground for the Pioneer Drive Project in Mt. Hope. This 12-unit project is the first project to be initiated under the Small and Medium Contractors (SMC) Housing Initiative, which was formally launched in January 2020. The SMC initiative was conceptualised to stimulate economic activity, mobilise the capacity in the construction sector and create jobs, while at the same time meaningfully addressing the high demand for housing. All homes constructed in this programme will be done by small and medium-sized builders and will cost under $500,000.00.

In his opening remarks, HDC Managing Director Brent Lyons stated that “in addition to small and medium builders benefitting from this initiative, low income earners who are unable to afford a mortgage on properties that are over $500,000, will also benefit. This initiative  therefore allows low income earners such as the cleaner, the fast food worker, the clerical officer or even the young self-employed earner to access affordable housing opportunities from the state.”

Line Minister, Major General Edmund Dillon, in his Address indicated that “many of the applicants for housing solutions cannot qualify to purchase an HDC house at current construction prices because they just do not have the means. In response to these issues, the HDC has been adjusting and repositioning itself to better serve the needs of the clientele, particularly the 83% of the applicants on the public housing database who earn less than $9000.00 per month. These factors are what contributed to the development of the Small and Medium Contractors Housing Initiative”. Dillon further stated that “the Government views this new initiative as an additional economic stimulus that will positively impact the housing construction sector, by creating jobs for skilled and semi-skilled workers, as well as generating indirect employment opportunities and satisfying some of the demand for affordable housing.”

In his brief remarks, Member of Parliament for St. Joseph, Terrence Deyalsingh indicated his delight with this new HDC initiative because it will provide additional housing solutions for those who desire to live in this part of the country. The MP also indicated that he is pleased with this project because it allows “the small and medium man to get a piece of the pie: therefore the whole spectrum is being catered for, with this project”.

In addition to the Pioneer Drive Project, which will yield twelve townhouse units, construction on other SMC projects are expected to begin within four weeks.

Three small contractors are working together on the Pioneer Drive project which is expected to be completed in under six months. Once completed, these units will be allocated to eligible low-income earners from the public housing database.

Also present to witness the sod turning were Councillor for the area, Darren Winchester; HDC Chairman, Noel Garcia; HDC Board members and the three (3) selected contractors for the project.

Additional information about the SMC:

In January 2020, the HDC launched the Small and Medium Contractors (SMC) Housing Initiative which gives small and medium builders the opportunity to construct basic  three bedroom/two bathroom housing units on serviced lots; either on vacant lots in existing housing developments or on available Government land developments, using drawings and specifications produced by the HDC. It is expected that through this initiative, the HDC will be able to mobilise significant spare capacity in the construction sector, stimulate economic activity and create jobs, while at the same time meaningfully addressing the high demand for housing.